Pieve di Cadore is an artistic and historical city. It was the birthplace of the famous painter Tiziano vecellio where it is possible to visit his house located near the town square.

Pieve is also a “walled city” defined by the presence of the defensive system located on Monte Ricco, which has been restructured a few years ago.

Throughout history, the town had a strategic position both from an administrative point of view and from a political and religious one. 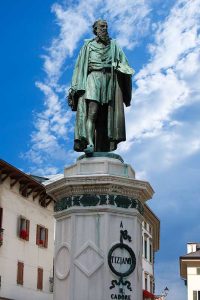 Tiziano vecellio: A unique artist of his kind

Tiziano Vecellio is a well-known contemporary artist of Michelangelo and Raphael. his painting is characterized by the sensuality of the forms, the bright and bright colors, hence the name of the Titian Red color.

Typical presence of the naturalistic pictorial art of the sixteenth century.
To celebrate its most illustrious fellow citizen, Pieve di Cadore has created a monument in the center of the main square, not far from which is the painter’s house with the Tizianesco museum. 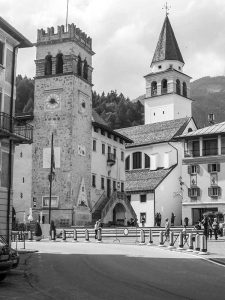 Another architectural structure, which plays a fundamental cultural and historical role for Pieve di Cadore is the Palazzo della Magnifica Comunità. The works to build it lasted from 1447 to 1477, while the tower was built later in 1491. During the Cambrai wars the palace was set on fire and destroyed and was later rebuilt.

Inside the palace you can admire the Community Hall, where the meetings of the Magnifica and the main cultural events of Cadore are held. The palace also houses the Cadorino Archaeological Museum, with Roman and pre-Roman artefacts found in various locations in the area.

Pieve di Cadore: A little bit of everything!

For vacationers who love local culture, in Pieve di Cadore they can find the “The Eyewear Museum” which is located a few steps from the town center.

Given its altitude (868 meters above sea level) Pieve di Cadore is also suitable for those who suffer from heart problems and want to enjoy their holiday in peace.

In the village there is a hospital with a helicopter rescue service for any eventuality.

For mothers with children in Pieve di Cadore there is a large park called “Il Roccolo”, surrounded by greenery, where children can play safely and with an area dedicated to them with various types of games.