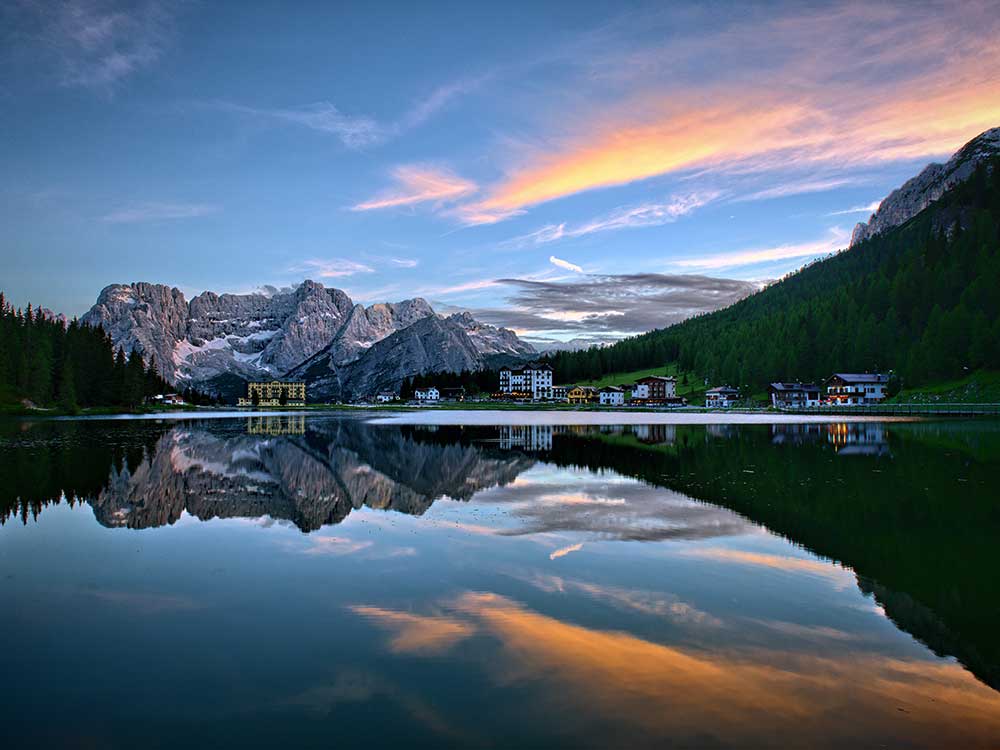 Once upon a time there was a princess named Misurina.
Orphaned by a mother and spoiled by King Sorapiss, governor of the Dolomites Between Le Tofane, Antelao, Marmarole and Le tre Cime di Lavaredo, the girl grew capricious and spiteful.

For her eighth birthday the Princess asked her father to have the Fairy Mirror that lived on Monte Cristallo as a gift.
The Mirror was able to read the thoughts of anyone who mirrored themselves.
The father was reluctant but for the love of his daughter I accompany her to the fairy.

The fairy did not want. The girl was capricious and selfish.
But seeing his father so heartbroken in not being able to satisfy his daughter, he decided to make a pact hoping in his heart that the request would be revoked.do di leggere i pensieri di chiunque si specchiasse.
Il padre era restio ma per amore della figlia la accompagno dalla fata.

Sorapiss, for the love of her daughter

The fairy asked King Sorapiss to be transformed into a mountain to save his garden on Mount Cristallo from the beating sun.
In return he would have given his mirror to the princess. For the love of his daughter the King accepted the exchange and the Little one happily took her mirror and did not notice that the father was turning into a mountain full of trees and crevasses.

Misurina found herself without realizing on the top of Papa Mountain and looking at the void below her from the top of the crevasse she had a dizzy turn and died.
King Sorapiss cried so much that two streams were created from the mountain which, reaching the valley, formed a small lake with multiple reflections
A unique lake in the world that took the name of Misurina

Misurina, a body of water with multiple reflections

Lake Misurina is nothing short of one of the most beautiful tourist sites in Italy.
It is located in Cadore between Cortina and Auronzo and its depth reaches 5 meters.
A holiday destination both in summer and in reverse around the Misurina lake rise the most famous mountains of the Eastern Dolomites.
Some lifts are built that take you to the surrounding mountains and allow you to have a breathtaking view.